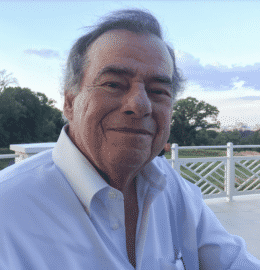 We recognize Charles Carroll Smith, Jr who passed away
on November 27, 2020.

Charles, Sheila Smith’s brother, was one of the first voices in creating the Our American Voice® program in 2009. He raised his concern regarding the lack of civic learning and engagement in the education of our young people. Charles not only “talked the talk” about the importance of civics, he walked the walk.  He was a contributor and supporter of the OAV program.

Charles began his education at Hardy prep, part of the Sacred Heart network, and regularly returned to Chicago for reunions with his buddies.  He graduated high school from Marmion Academy.  He earned his BA in political science from Loyola University in Chicago and his Master’s in Business and Public Administration from the University of Illinois in Springfield.

Charles began his professional career in the military, serving as a lieutenant in Army Intelligence in Vietnam during the Tet offensive of 1968.  Upon his return stateside, he worked in the Army Intelligence Office in his home town of Chicago.

A life-long Democrat and dedicated public servant, Charles began in the IL political arena in 1974 working for Illinois State Treasurer Alan Dixon (D-IL).  In 1976, Secretary of State Dixon appointed Charles Deputy Secretary of State. And in 1980 when U. S. Senator Dixon , asked Charles to join him as a key member of his staff.

Charles served as the legislative director and Senior National Security Advisor to United States Senators Dixon (1982 to 1993) and Wendell Ford, D-KY (1993 to 1995 &1996 to1999). Charles advised both Senators on national security and foreign relations, and provided the day-to-day direction and oversight of the Senators’ professional legislative staff.

His legislative accomplishments included key advisory roles in the passage of the Small Business and Federal Procurement Competition Enhancement Act of 1984; Competition in Contracting Act amendments to the 1985 Defense Authorization Act: the Defense Industrial Base Preservation Act of 1988; and, the establishment of the Defense Base Closure and Realignment Commission in 1990.

Charles served as the Executive Director and Special Assistant to the Chairman of the 1995 Defense Base Closure and Realignment Commission (Commission). He helped achieve bipartisan agreement on the base closure and realignment plan produced by the Commission.

After, Charles left public service in 1999, he went into private practice as a lobbyist representing firms, state and local governments pursuing defense appropriations until 2020.

Charles was known as a people person, although he occasionally shared a strong opinion with those who disagreed with him.  He was also living proof that you could take the boy out of Illinois but you can’t take Illinois out of the boy.

He was a Chicago Bear and Chicago Cub fan with unquestioning loyalty.  Charles was also a devoted Notre Dame Fighting Irish fan. His favorite singer was Frank Sinatra. There is no question that Charles lived the mantra  “I Did It My Way”, that signature Sinatra tune.  He was truly one of a kind and an incredibly kind person.  Those who knew him and many who didn’t are better off because of who he was.

His love of civics and public service will live on in the Our American Voice® Students.